When you combine photos together, realistic cast shadows are the trick to making it look real. In this Photoshop tutorial, Colin Smith shows you different ways to make shadows to blend people with the background environment. Scroll down to see the written tutorial and more tips.

Here is a simplified cast shadow video, using a basic shape on white.

© Photography and tutorial by Colin Smith

Open your image and remove it from the background.

Here we have the background plate and the extracted subject that we need to apply a shadow to. Without the shadow, there is no visual clue as to the scale and position of the object. The shadow also serves to anchor the object to its surface. 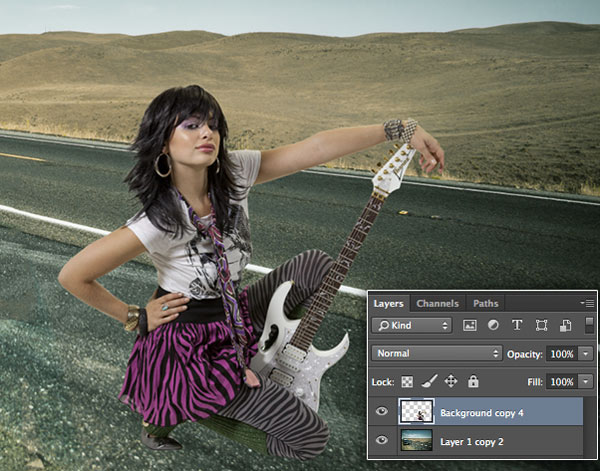 The first thing that we are going to do, is to create a standard drop shadow.

Choose The Layer style button at the bottom of the Layers panel (looks like a little “f”) Select Drop Shadow.

At the moment, it looks more like a person standing in front of a billboard, rather than being integrated into the scene. That’s the difference between a  drop shadow and a cast shadow.

For some realism, let’s first choose the correct color for the shadow.  Click the black rectangle to the right of the blend mode in the Drop Shadow dialog box. You will see a color picker. I changed it to a blue color to match the color of the shadow on the car.

Also change the “size” to match the softness of the other shadows in the scene. 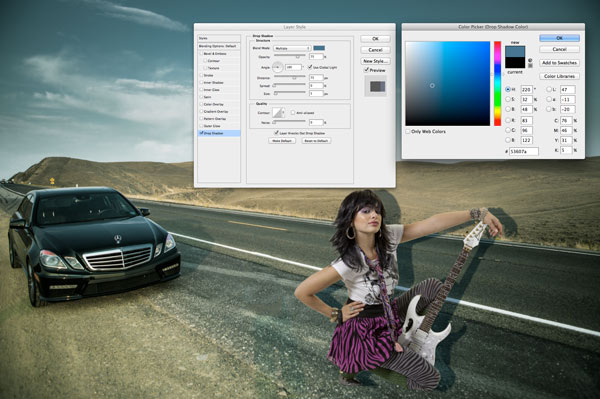 We now have a pretty good drop shadow, but we want a cast shadow.

We are going to separate the layer style from the layer, so that we have the shadow by itself on its own layer.

In the Layers panel, right click on the little “f” on the right of the layer name. You will see a drop down menu.

The layer will now be spilt into 2 layers. The shadow will be moved to its own layer directly underneath the original as shown in the screen grab. (I moved our guitar girl to the left of her shadow, just do you can see the separation in the image here). 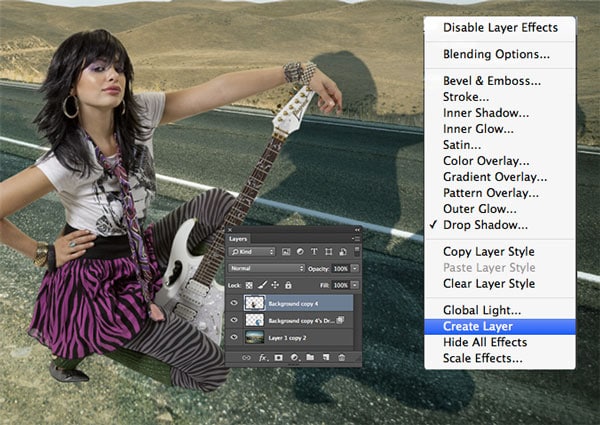 Now to distort the shape. (If you are going to do this to text, you must render the type first)

Press Ctrl/Cmd+T, this will bring up the free transform tool. Right click on the selected object, (Mac:Cmd click). Select “Distort” from the pop-up menu.

You will see a bounding box with 8 little squares. Drag in the middle of the box to reposition it. Click and drag the top right square (called handles) until it looks similar to the picture. 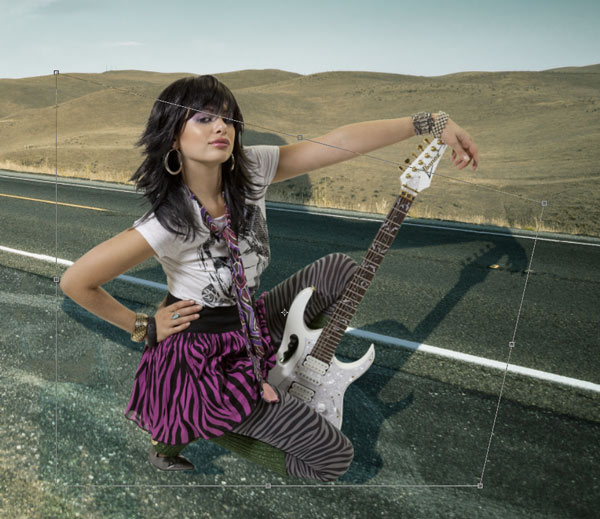 Click and drag on the left top handle to match the angle on the road behind our model.

Reposition any of the handles if you need to.

Press Enter/Return to apply the transformation.

You now have a basic cast shadow. However its missing some realism that we are going to add now. 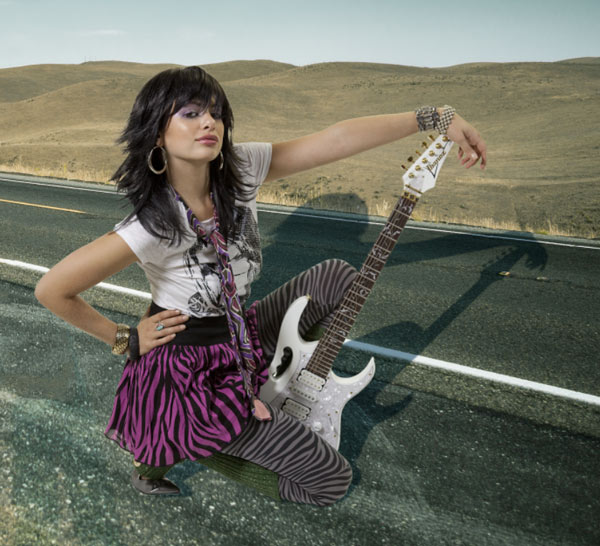 If you look at a shadow in the real world, you will notice, as the subject that’s casting the shadow gets further away from the surface that receives the shadow, 2 things happen. The shadow will soften with distance and lose intensity (or darkness).

We now want to make the shadow softer as it gets further away.

Duplicate the shadow layer by dragging the layer into the “new layer icon” in the layers panel, of press Cmd/Ctrl+J.

Turn off the visibility of the bottom shadow layer and select the top shadow layer, This is the one we are going to soften. 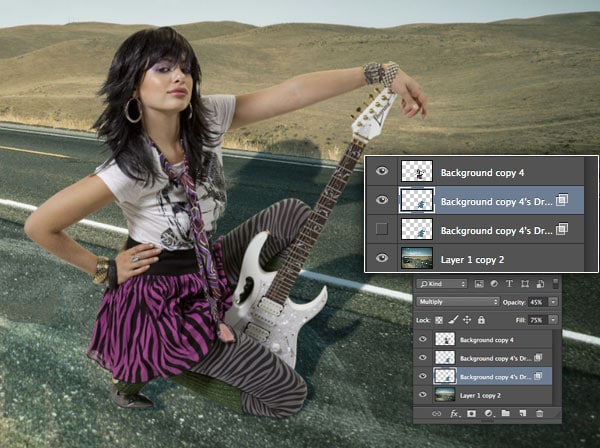 Let’s set this second shadow to the softer end of things. (We are going to blend 2 shadows together)

Choose Filter>Blur>Gaussian Blur.  Add enough blur to make the shadow softer, the setting will vary according to the size of the image that you’re working on. Press ok when done. 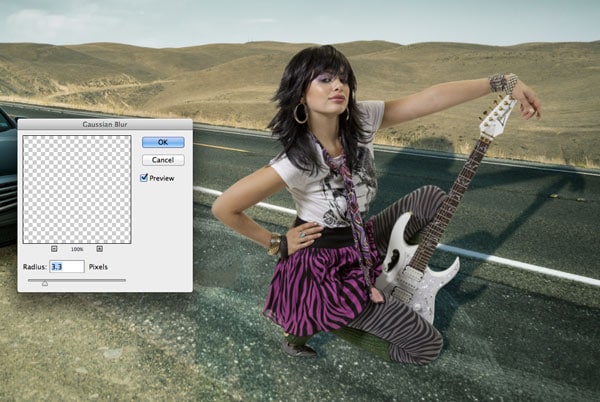 Time to blend the 2 shadows together.

Add a layer mask to the top shadow layer by clicking the Layer mask button in the Layers panel.

Grab the gradient tool and set the colors to black and white (D key). Choose linear, foreground to background.

Make sure the mask is selected and using the gradient tool drag it from about 1/4 way to the the bottom of the shadow to about 3/4 of the way up to blend the 2 shadow layers. (The red in this image shows where I dragged the mask)

For more details on this technique see here 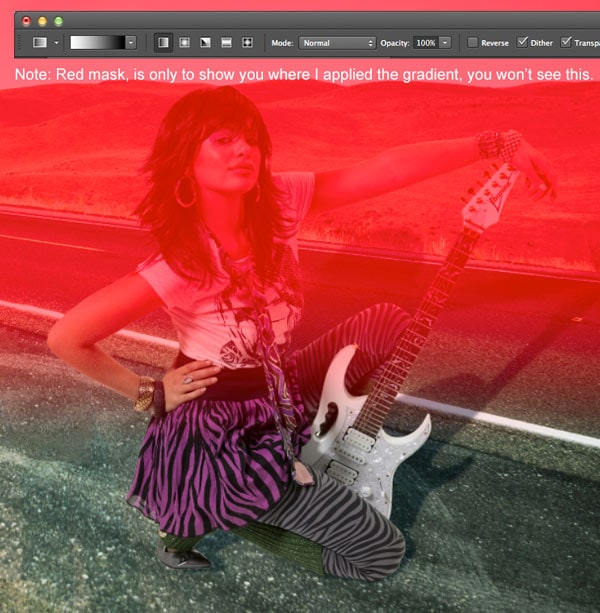 Experiment and see what looks best for your image.

You now have a basic, realistic cast shadow, but read on. 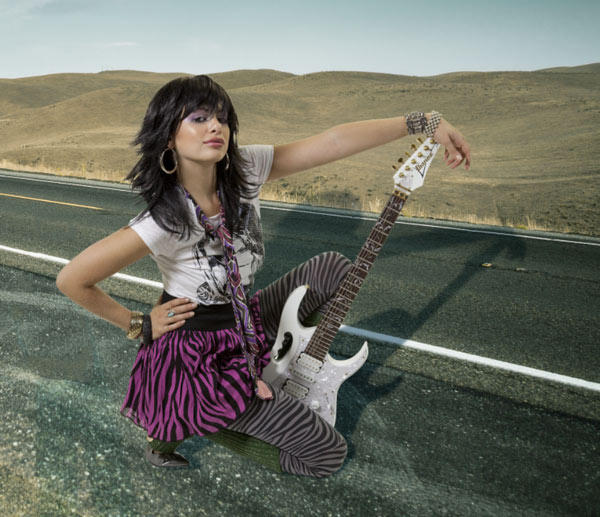 One of the things I’m often accused of, is being a perfectionist. I believe its the extra little things that really make a difference between a good effect, and one that is believably realistic.

There are two little issues in this particular image. #1. The shadow at the tip of her head wouldn’t stay the same over the lip of the road, as there is distance there in the background plate. #2 The color of our girl doesn’t quite match the colorizing of the plate. (The background plate was adjusted with a slight color cast for effect.)

Let’s deal with these 2 using some quick-fix techniques that I have developed.

Let’s fix the shadow where its going over the edge of the road (This is very important for skies, as a subject doesn’t usually cast a shadow into the sky (unless its foggy or cloudy).

On the top shadow layer, create a layer mask. Paint away the portion of the shadow that you want to hide with a black brush on the mask. If you want to still have some shadow showing, but reduced; double click on the layer mask to open the properties panel (Mask panel in Photoshop CS6 or earlier).

Slide the density slider to adjust the opacity of the masked area. (Apply a levels adjustment to earlier versions of Photoshop that don’r have a mask panel). 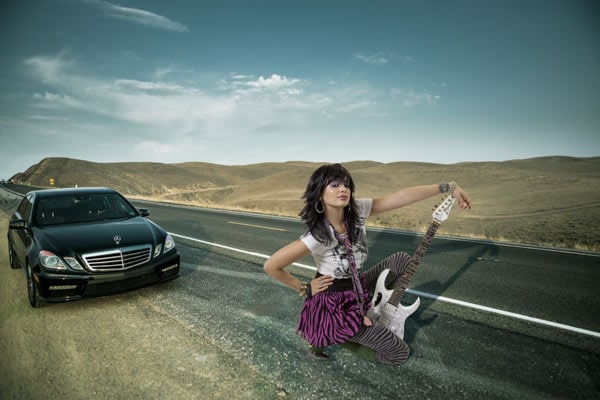 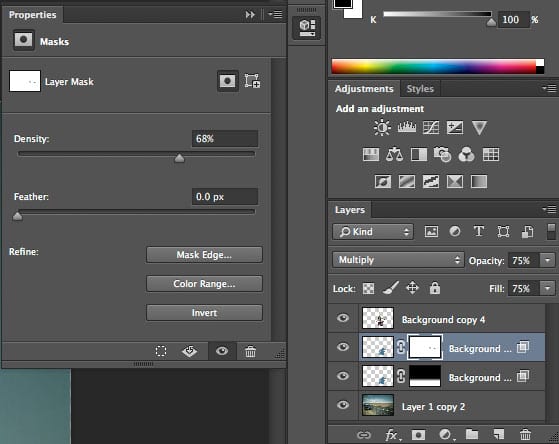 Here is a little trick that I often do to composites. To pull all the layers together visually, I apply a color cast to the entire image. 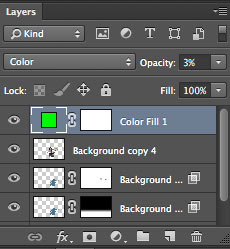 Create a new Solid Layer by clicking on the Adjustment layer button at the bottom of the Layers panel and choose Color Fill.

Set the color for the mood that you want.

Change the Layer blend mode to Color and drop the opacity to a low amount. 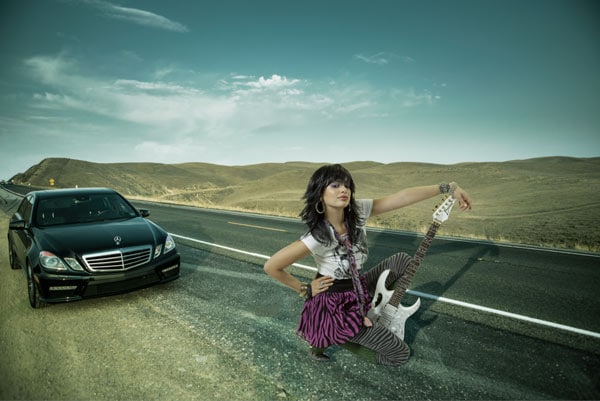 I made a few finishing touches to make it look a bit more realistic and punchy.

First of all, I scaled her down a little bit to fit better (I made her big earlier, so you could easily see the shadow being created). I also rotated the shadow clockwise, to better match the direction of the car (Maybe I could still go a bit more, but hey, it’s just a tutorial, not a work of art). I also added a little bit of “Self Shadow” (shadowing on the subject itself) with  a touch or burning (see tutorial on dodging and burning here).

I also adjusted the contrast in Camera Raw and just for fun, aded a little bit of a blur to the hills at simulate depth of field. 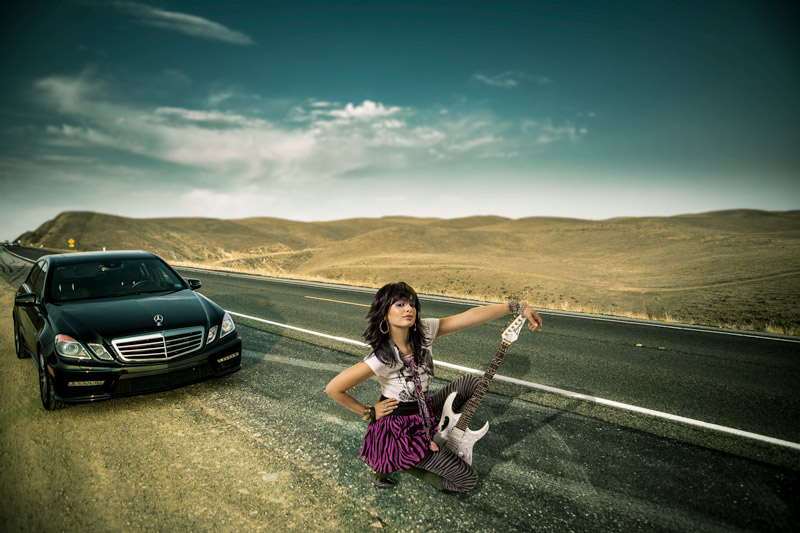 Take some time to observe the world around you and see how shadows work in the real world.

If you want your artwork to look realistic, then you have to spend time and become a student of observation. Your ability as an artist is linked in how closely you observe the world around you.

So, there you have it. The steps to creating a realistic Cast Shadow in Photoshop. If this kind of training interests you, check out my Compositing in Photoshop premium training  that includes a section on “Layers and Channels, Deep Dive” where you will learn a ton more. (This training is fundamentals of Photoshop and most of it applies to any version of Photoshop).

Grab your free PDF ebook right now. We were going to sell this for $9.99, but figured we would give it away instead and see what happens 🙂 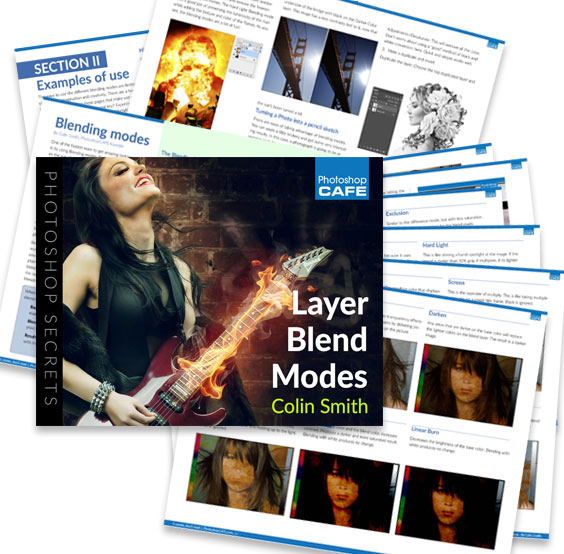 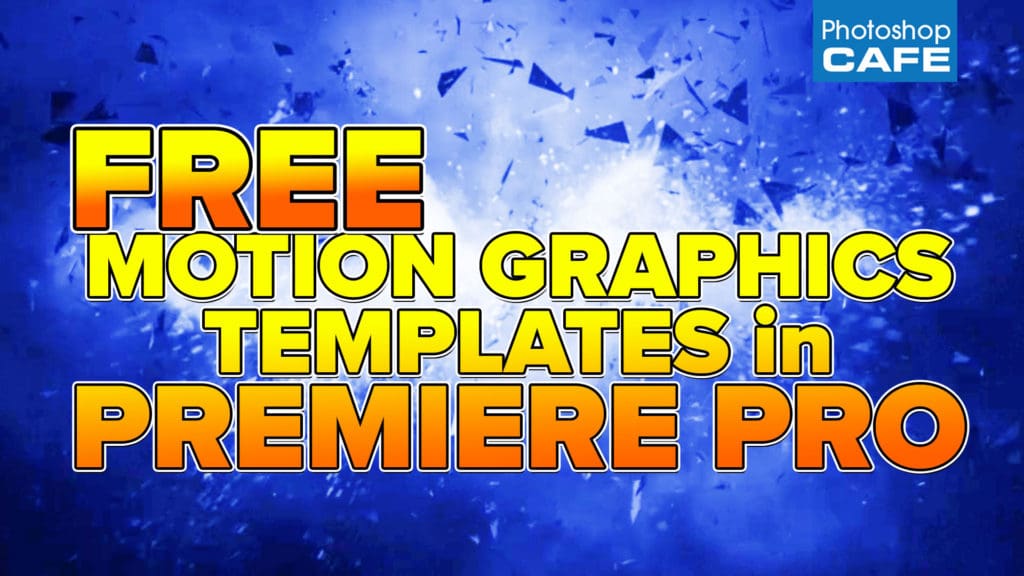 How to use Editable Motion Graphics Templates in Premiere Pro

How to use new Motion Graphics templates in Premiere Pro for your video titles and graphics. Change text, edit color,... 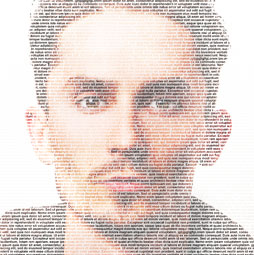 This weeks Photoshop tutorial, I'm going to show you how to make the portrait text effect. This takes a photo... 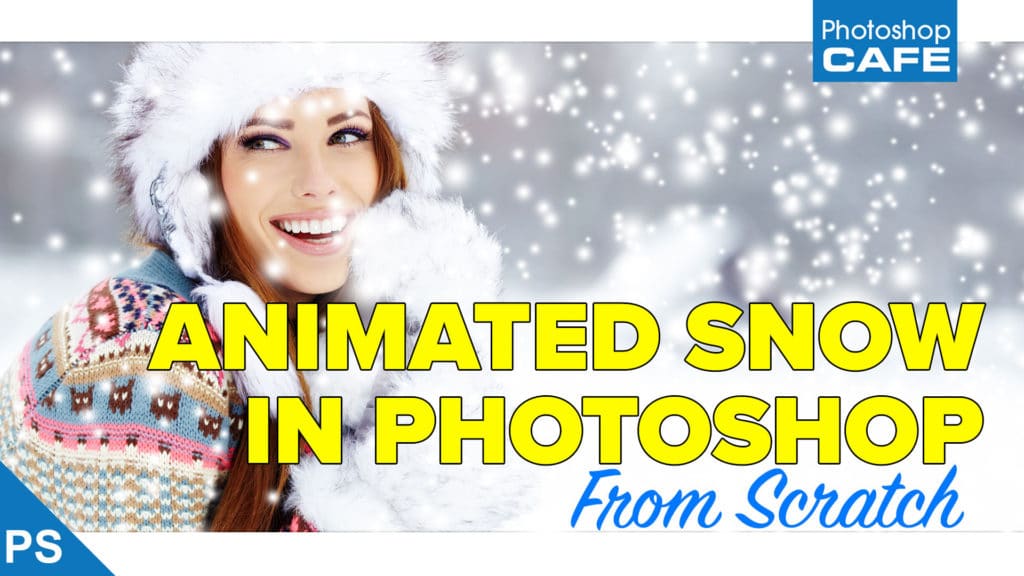 How to make animated snow in Photoshop from scratch

Intermediate Photoshop tutorial, how to make realistic animated falling snow in Photoshop. Create snow overlay for video or for your...