Lee Kohse is an artist from California. One day in 1994, he found a computer with Photoshop on it. He has been using it almost daily ever since. He has earned over 30 awards for Art Direction and design. His client list includes Nike, Verizon, Microsoft, Lucasfilm, Topps, Inkworks, DC Comics, IDW Comics, 20th Century Fox and he has produced art for Star Wars, Indiana Jones, Aliens Vs Predator, Angel, and more.
Currently he is the Creative Director of BloodFire Studios (www.bloodfire.com), an indie comic publisher where he works with some of the best artists in the film and comic industries creating comics and original content for corporate clients as well as his own comic, Kindergot 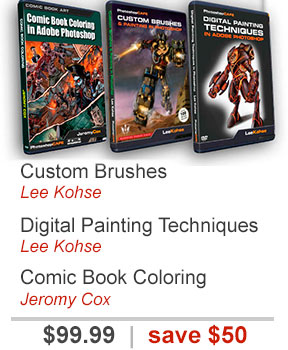